Fasting, Coffee and Losing Weight After 50

I’ve done really well fasting this week, with at least 16 hours of a fast and my best day was 19 hours. I re-lost three of the four pounds I (re-)gained after my birthday trip, ie: cupcakes, popovers and lazy man’s lobster, not to mention beer and cocktails. It’s truly amazing how easy it is to put weight back on!  Sometimes I feel like the Queen of Excuses. but hey, a Birthday is as good an excuse as any.

Maybe the best at this point! Amiright?

Today I didn’t fast like I should have.  I just felt like a coffee this morning with my little bit of Coffee Mate and the Sugar Free Italian Sweet Creme Coffee Mate, which I really like – for one thing, I am cutting out sugar (as much as possible, anyway) and just a little something like this makes it easier. My whole life I drank coffee with sugar and half and half, and now 80% of the time (when I’m being a good girl) I drink my coffee black.  I used to hate it, but now I…. ok, I tolerate it.  I have a goal, and for the most part the goal is overriding the weaknesses.  I drink green tea too but can you believe that seems to give me an upset stomach on an empty stomach? So much for trying to be healthy! So usually I am drinking the black coffee.

Even though today I had my Coffee Mate in my coffee, I haven’t eaten and will try to not eat until noon.  One reason I do this is because I learned long ago that the more I eat, the hungrier I get. So as soon as I eat a “balanced breakfast” — I’m pretty much doomed because my 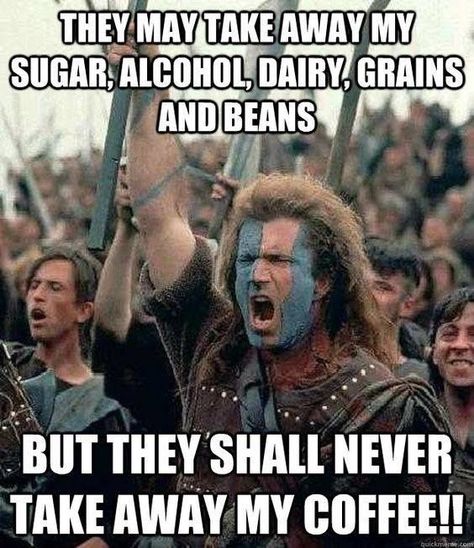 stomach then yells at me until I eat again.  “You know there’s some leftover steak and veggies in the fridge, don’t you…. ?”  “How about a yogurt?  You can do yogurt!  Let’s do a yogurt. And let’s add walnuts!”  I don’t like to be rude to my gut and say things like “Shut up already!”  but then again, my gut isn’t exactly very nice to me these days. Probably not a good sign if you’re having intense arguments with your body parts…

I used to have the constitution of an ox, and man, something happened. It’s taken a while, but now I pretty much know everything I should not can not eat.  Pretty soon I’ll be eating nothing and will still be 15 pounds from my goal!

As my favorite group Jethro Tull sings “Nothing Is Easy!”  And losing the chub sure isn’t easy after 50 and even worse after 60.  I feel like with the amount of food I eat and the quality, I should be 140 by now, but I sure am not.  I’ve even cut down on cocktails in the evening with my husband – a lot.  I think that is really holding me back in losing the weight, though you’d think a glass or two of wine wouldn’t interfere that much…   but apparently it does, or at least doesn’t help.  I mean, gee – I’m not going to be a teetotaler..  that’s just not going to happen. I’m about as close to that now as I want to be.

I say,  Enjoy life! We just don’t know what’s around the corner.

Learn to Blog for Free

Let's get to know each other! Please sign up to receive the latest news and updates!

You have Successfully Subscribed!