Short Answer:  Yes. Prior to losing my job a year and a half ago I might’ve thought no, maybe it doesn’t. I mean, we’ve always heard about it, but when we’re younger, does it seem important to us? Of course not. We may have thought that it was in fact an ‘excuse’. Maybe we didn’t ever pay any attention to it at all.

Til that day comes, and you have a box in your hands and you’re walked out to your car like you’re a thief or something. Like the fabric company you have worked for for ten years acts like it’s Microsoft with a treasure trove of proprietary information on the level of NASA – and you. might .steal. some of it. You’re sitting in your car with your box. You’re shocked, surprised, sad. And you’re 62. And you work in web design, a fairly prolific, tech-y field, with lots of experience. No problem, right?

So I thought. Yet a year and a half later I still don’t have a full-time job. And that’s ok, I guess. I’ve been doing some contract work and I’m very under-employed but I am hoping things get better this year.  And I’m learning new things. 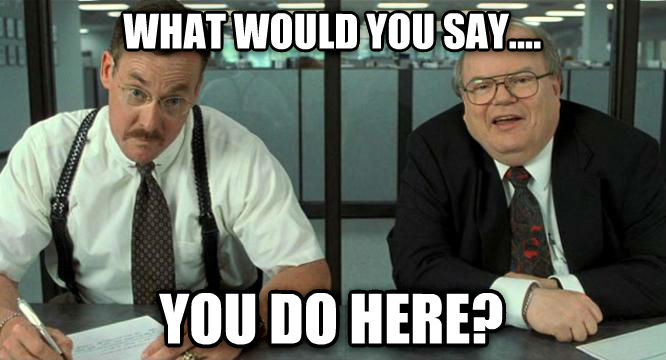 The Age Discrimination in Employment Act (ADEA) forbids age discrimination against people who are age 40 or older.  But what can they do about it, in most cases? Seems like you would have to have a blatant example of someone saying or doing something extremely grievous. When a company who bought the one I worked for came around interviewing people to see exactly what they did at the company, I thought the person who was to be my new boss and I were having a normal conversation until the end when he started getting very weird. I was working so hard to be pleasant and informative in my responses to his questions, I kind of missed a couple tells.

Until my ride home from work, that is.

When I was driving home I starting going over the whole conversation….  and some kind of delayed light bulb came on. AARP.org says in regard to age discrimination on their website  –

You start hearing tacky comments about your age.

and it hit me right then that he said at one point “We aren’t here to teach old dogs new tricks…”  When he said it the first time I think I kind of laughed, assuming he was talking about the IT guy who was extremely old-school.  But on my way home I was like “Wait, did he mean me?? What was he thinking saying that to me! It was obvious at that time I was in my mid to late 50’s. Is he just clueless? Is he just mean? And is that why he was literally shaking in the chair at the end of the interview? He realized he may have ‘stepped in it’?  Like I said – weird interview. He also said a couple other questionable things, but that was the worst.

Then I got mad. Really mad. Not only about what he said but that I’d let him and didn’t say anything right then. I was so caught off guard, it didn’t even hit me til the ride home a couple hours later. No one had ever spoken to me like that before and I didn’t catch it. So… even though this company had just bought us, I filed a complaint with HR and put the whole thing about it in writing. After all, this guy was supposed to be my immediate superior, and his attitude was very questionable and it didn’t bode well for our relationship if he said that to me, ABOUT me. Long story short, I didn’t lose my job and he eventually left or was forced out and he could play with his Lamborghinis or whatever fancy cars he collected. Yes, really.

Older workers are being fired or offered buyouts, and younger ones are being hired.

And that the most common term for this is “culture fit.”  They say when a company hires 30 versions of the same person over and over again, it’s a big red flag. The term ‘culture fit’ really rocked me when I read that because I literally had a contract client let me go saying I didn’t fit “their culture”.  Now at the time I knew I was leaving, whether it was my choice or his, I didn’t know or care – but to say that? Really pissed me off. I won’t use the word I used, but I asked him “What — culture? You’re 3 people here and one person in Dallas.”  And how do you fit in it?  You’re in your late 50’s yourself, “dude” – (he liked to use the term ‘dude’ a lot, which sounded ridiculous but I digress).  Was he just clueless?  Mean??  Yes, I think he was just nasty and mean. Anyway, what can you do about a contract job where someone says that to you? Nothing, I suppose. He was cheap and had young guys working for him full time on 1099 contract. No insurance, no nothing, but you better be here when I say so. Buh-bye.

So despite all of my years of experience, and all of the cover letters and resumes I tailored – with very few call backs or responses, I can say now in all honesty that my skills needed some serious updating. I could build a web site from scratch but could I build one on WordPress? The web design field moves at lightning pace on a daily basis, let alone after a decade of working in one spot. Yes, I learned a lot there, but not enough.

So though I do say that YES, there is definitely age discrimination and I suspect a large amount of the jobs I applied for never even saw them or were looked at twice (I can only assume, so few even reached out personally), I can also say that it was on me too. I needed to learn more up-to-date skills, so hey, I have done that and I am continuing to learn. Lucky for me I love this career and all of it’s myriad of manifestations a lot. God willing, I will be adequately employed again this year and making money again. And yes, if you’re wondering, I have to make money – not every 62 year old can retire and go on Social Security when eligible. Certainly not these days.

Learn to Blog for Free

Let's get to know each other! Please sign up to receive the latest news and updates!

You have Successfully Subscribed!